Moment of honesty: If you buy something through our posts, we may get a small commission. Read more here.
0

When a table saw just isn’t getting the job done or you need a delicately intricate cut at an angle, the DeWalt DWS779 12” compound miter saw might be the best tool for the job. DeWalt doesn’t make a lot of different compound miter saws which is why this was such an interesting product for us to review. First, there are the reviews left by real customers which are raving and give outstanding 5/5 stars. Being intrigued, we wanted to see what all the fuss was about and let us tell you, this thing packs some power in it. 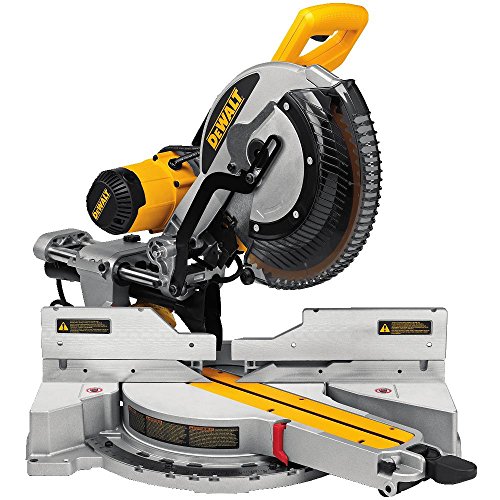 The design of this miter saw was made so that you could do complicated cuts. DeWalt thinks the design of this saw is so good that they’ve even backed it with a 3-year warranty. Most of the dust that’s generated from cutting is collected for easy removal and while there’s not as much DeWalt yellow on this saw that’s usually on other products, there’s a lot of tools and functions on this one. You can make cuts from practically any angle and they’ll come out smooth. The rotating base makes it easy to find a cut and lock it in.

Q: What’s this about an LED light not being compatible? Is there a LED cut line?
A: No, there’s not because it’s not compatible with this model and if you want one that is compatible, you’ll have to search for other models and read the specifications to see if it’s compatible or not but sadly, this one is not. However, it’s not necessary as it cuts smooth and doesn’t need a laser to do so.

Q: If I have 4×4 and 6×6, will this saw cut them just fine?
A: Yes, easily. Hell, you can do 6×6 just as easy too but you do have to turn them over first to make sure that the cut’s going well. So, after your first cut, make sure to turn them over. Other than that, yes, the boards listed in the question are cut just fine.

Q: I want a straight cut on a 2×4, can this saw do that?
A: Absolutely. You do need to make sure that the saw is 90 degrees on the bed though or else, it’s going to have a hard time doing so. 2x4s in general on saws like this doesn’t handle well and can be a little rough if your saw isn’t set up perfectly, so make sure it’s set up at 90 degrees or we can’t guarantee that a board won’t go flying. The adjustments need to be perfect.

Is the price of this saw too pricey for a purchase? Did DeWalt do it again? We don’t think the price is too pricey for this saw and we do believe that DeWalt has made another unique classic when it comes to saws. The shipping is relatively quick on this product which is strange because some DeWalt products take forever to ship for some reason. This is an overall great saw with a lot of power that cuts any type of board without effort.

Dewalt DWS779 Review
Robert Johnson
9 Total Score
User Rating: Be the first one!
Related Articles
We will be happy to see your thoughts

Welcome to Sawinery. We are a news and analysis website covering anything related to woodworking and saws.