Skip to content
Moment of honesty: If you buy something through our posts, we may get a small commission. Read more here.

Investing in a table saw is like embarking on a new relationship that will last for years. It’s important to pick the right one, or you could be facing years with breaking components, uncovered parts and a whole lot of headache. To prevent this, our experts put together a Dewalt DWE7491RS review to help you make the right choice for table saw. 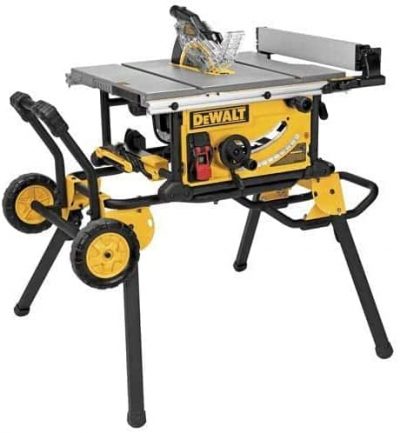 Dewalt is a 100 year old tool company which manufactured the DWE7491RS which was engineered for convenience and durability.. The jobsite table saw has a rolling stand that can be easily set up and put away for storage. The rolling stand is very durable unlike the ShopSeries RK7240.1 stand. It goes to great lengths in order to stabilize the DWE7491RS saw. 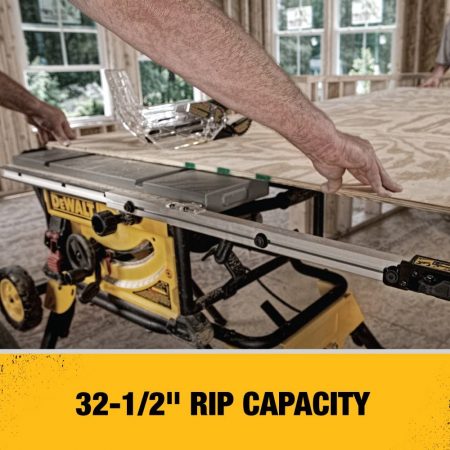 Having the option to wheel the jobsite table saw is a huge perk because it does weigh a considerable amount of 90 pounds. Even though the table saw can be considered cumbersome and large, it is still easy to maneuver it around the job site and move it to different locations.

Now our team will dive further into the capabilities of the Dewalt DWE7491RS 10-inch jobsite table saw and evaluate the overall performance in this part of the DWE7491RS review.

In most Dewalt DWE7491RS reviews, the motor and power are highlighted. This table saw comes with a 15-amp motor, that guarantees cutting through hardwood like deck boards and thicker materials like a hot knife through butter. Also, at 4800 RPM, you won’t have to worry about ripping and cutting through wood or other materials you have on hand. The RPM stands for revolutions per minute, and is essentially the speed at which the blade moves.

As a corded option, to reach the full potential of the DWE7491RS, you need to be close to a power source. You can purchase a longer power cord to give you a wider range of mobility, but the length of the power cord is the only thing that limits your movement.

Its 32 1/2 inch rip fence is telescoping, which our team will cover in more depth later, one can extend to 32 inches to the right and 22 inches to the left side, giving you a lot of room to work. 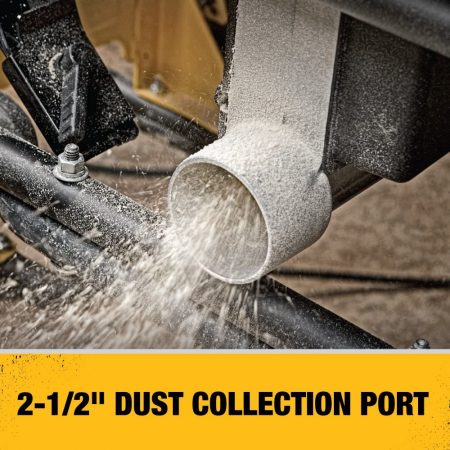 The table saw uses two positions as a telescoping fence that operates on the rack and pinion fence. Meaning, the Dewalt uses rack and pinion gears to control the movement, which delivers a smoother operation compared to traditional fence systems.

Aside from this cutting-edge system, the ripping fence on the Dewalt table saw has a flip over support, which helps secure narrower cuts when the fence is pushed up.

The performance section is arguably the most important part of a table saw review, after all, you want to make sure that the table saws can do its job well to prevent you from going back and forth to the market, right? Factors that influence the performance of the Dewalt portable saws include the powerful motor of 15 amps, and additional components such as the miter gauge, the blade guard, and the riving knife.

The Dewalt  has a Site Pro system, which allows the switching of the said components to be done quickly and easily. The Dewalt table saw is a tool-free power tool that allows you to install the riving knife, miter gauge, blade guard, and riving knife with a simple switch of a lever. 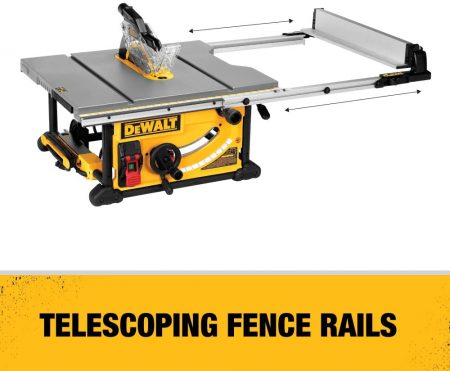 Our experts also feel the need to shine a light on the efficiency of the Dewalt DWE7491RS table saw. As mentioned, the powerful motor and RPM allowed our team to rip through wood deck boards in just a few seconds each time. The 90 deg. cut depth also gives users plenty of flexibility.

For saws to do the job well, they need to accommodate a wide range of materials of different sizes, which is what the DWE7491rs can do with the material support.

As we mentioned, the built-in stand really makes the DWE7491RS a top contender in the table saw category. The stand is sturdier and more reliable than similar ones sold separately by the brand. The built-in stand also allowed our team to pack up the portable table saws easily.

Having the portability makes the job site table saws less of a permanent fixture and one that can accompany you from site to site. Even if you plan on setting up the table saws in one location for the foreseeable future, the rolling stand will give you an option should you change your mind.

As said in the beginning, Dewalt created the DWE7491RS portable table saw with convenience and longevity in mind. The saw utilizes a carbide [1], which will provide higher precision than a regular steel blade and last for much longer as well. Speaking of the blade, the saw is compatible with a dado blade. 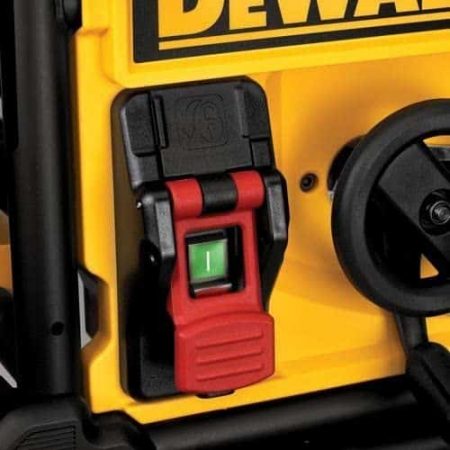 The largely steel build is accompanied by plastic parts, which many users have grievances about, but these components can be easily replaced if necessary.

If you are looking for portability, you can also check the high-performing portable tables saws here.

Then there is the sawdust port, which is an essential but often forgotten about a feature in saws. We all know how much of a mess these power tools can make, which is why safety gear such as goggles are recommended by our team. The cleanup after a job well done can also take a significant amount of time.

Most people choose  portable package table saws to set up outdoors to mitigate the lengthy cleanup, but a sawdust collection system is the most important part. The DWE7491RS has not one but two dust ports to connect to a vacuum. It will handle the dust collection as you work and is effective enough to clean up 80% of the mess, but of course, this depends on the material you are cutting.

Also, you need to make sure the vacuum hose is compatible with the dust port. Luckily, the search for the correct size is easier with this model because there are two-port sizes. The one below the table is 2-½ inches and the one on top of the blade guard is a 1-¼ inch dust collection port.

We have seen some  DWE7491RS reviews claiming the stability of the job site table saw is an issue. Our team found that it’s sturdy and stable enough for the most part. The rolling stand does help secure the saw, but we won’t argue that the stability of the model can be improved. 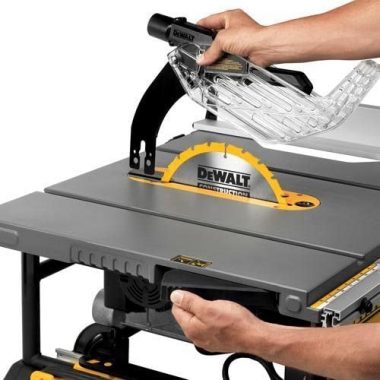 Other than the saw itself, you have the blade, the push stick, the miter gauge, blade guard assembly and of course, the rolling stand. Although the saw can accommodate a dado blade, you need to purchase the dado throat plate separately.

A Safety feature is another important feature to consider when operating a large tool such as a table saw like the high-powered DWE7480 and DW745. You must make sure you have the proper gear including gloves if necessary and eye protection. What safety features does the Dewalt table saw itself include?

The saw comes with a push stick to help with smaller wood pieces and a blade guard. There aren’t a ton of safety systems on this particular saw model, so when you are ripping and cutting, our team advises users to pay special attention to where they place your fingers.

The price of the 90 pounds DWE7491RS table saw is a few hundred dollars. That doesn’t seem ludicrous for all that you get with this particular saw. It provides you with a wide cut range and the 32 1/2 inch rip capacity is wider than the competition. Still, it isn’t as cheap as some other models out there, and for the lower stability and a lot of plastic components, some would argue it isn’t worth it. 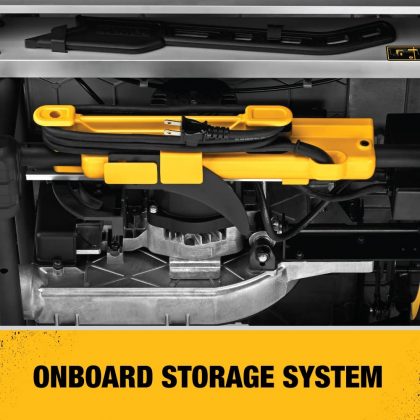 However, our experts feel the mobility of the saw thanks to the stand makes up for the slightly higher price. It may not justify the cost for all users, especially if you don’t have the need for a portable saw,  but for what you get, our experts’ state in our table saw review. Dewalt DWE7491RS really is an excellent choice.

For an expensive investment, you want the highest level of buyer protection possible. The Dewalt brand offers a generous 30-day money-back guarantee with up to a 3-year limited warranty.

Our team believes that the Dewalt DWE7491RS table saw is a 5 star excellent choice, especially for those who require portability. Even if you are unsure about taking the plunge, know that your purchase is protected with the guarantee and warranty provided by the brand.

The extra ripping capacity allows more cuts and a wider cut range that enhances the performance of the saw. It is engineered for durability, the carbide blade is reliable and is all you need to make the perfect cut.