Moment of honesty: If you buy something through our posts, we may get a small commission. Read more here.

There are 3 main table saws types. In this article, we’ll go through each of them and compare their different features and uses. 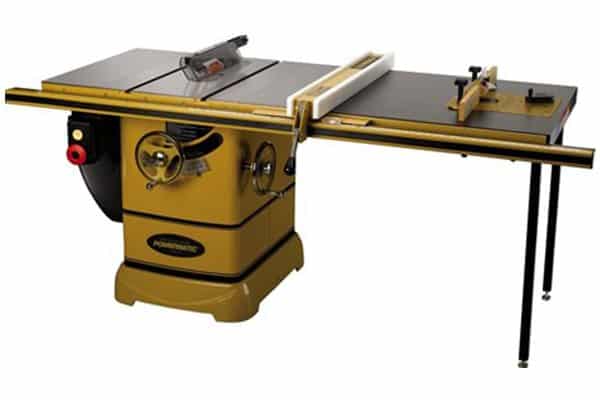 Cabinet table saws are substantially constructed and created to exceed the performance needs of professional and hobbyist woodworkers. This brand of table saw is constructed from sturdier components such as iron and steel as well as featuring soldier gearing, trunnions, and arbor assemblies. It simply explains that the cabinet table saw cut thick hardwoods with ease, providing vibration-free operation.

One of the benefits you can get from the cabinet table saw is fewer injuries. Individuals who have used different types of table saws have experienced loss of fingers but having a cabinet table saw, individuals only suffer a small nick on the index finger, rather than losing the whole thing.

The motor is confined within the cabinet and drives the blade with either one or more parallel V belts, usually ‘A’ belts as they are maybe ganged without possessing to be specially chosen (if not, specially chosen sets of light-duty ‘4L’ belts are used).

A cabinet saw gives many advantages over another type of table saws such as contractor and hybrid saws. Some of the advantages include; heavier construction for lower vibration and high durability; a cabinet mounted trunnion (the mechanism that incorporates the saw blade and at the same time, allows for height and tilt adjustment); enhanced dust collection as a result of the totally enclosed cabinet and common incorporation of a dust collection port.

Cabinet table saws have a simply replaceable insert around the blade in the tabletop permitting the use of zero clearance inserts, which lower tear-out on the bottom of the workpiece. It is common for this kind of saw to be equipped with a table extension that tends to increase the ripping capacity for sheet goods to 50. These types of saws are featured by a cast iron top on a complete length steel base, known to be square in section, with radiused corners.

In the United States, cabinet table saws generally follow the model of the Delta Unisaw, a creation that has changed since 1939. Saws of this kind are made in the United States and Canada and are imported from Taiwan and China.

American cabinet table saws are created to accept a 13/16 large stacked dado blade added to a standard saw blade. The general blade size is 10’’ in diameter with a blade arbor diameter of 5/8. Also, the American cabinet table saws include an anti-kickback device that incorporates a splitter, a bright plastic blade cover, and toothed anti-kickback pawls.

The saw blade can charge to either the left side or right side of the saw, depending on the brand of the saw. The American saw is simple in design and is highly capable of efficient, high volume and precision work.

European style cabinet table saws are usually more difficult and modern in creation compared to the American kinds. They usually are equipped with a sliding table to enable cross-cuts simpler and safer. Often, the European cabinet table saws are not equipped to permit the use of a stacked dado blade set and this is as a result of its safety laws in European markets.

As at 2015, the European style sliding cabinet table saws possess a small following in North America. They are sometimes imported from European produces or sold directly by the U.S based companies.

For information about table saws in general, read here. 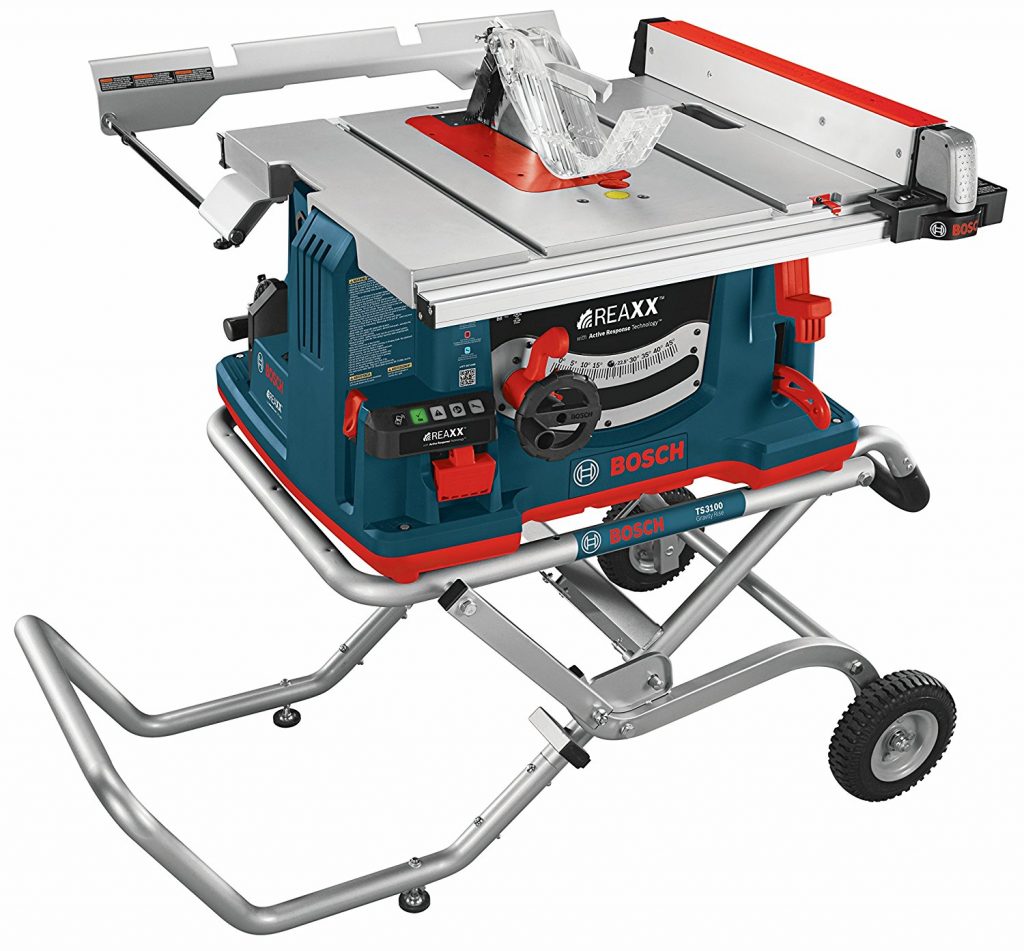 Jobsite table saws are slightly bigger than benchtop models and often are placed on a stationary or folding stand during work. The job site table saws are majorly used by carpenters, contractors as well as a tradesman on the job site. Many of these job sites table saws are more expensive, unlike benchtop saws which are typically in the region of $300 to $600 but way less than the hybrid models.

Most saws belonging to this category have small but strong 15 amp universal motors. Various higher-end saws possess gear-driven motors. The majority of these job sites table saws are relatively light and can be transported to a job location with no stress. Also, many of these Jobsite table saws are established more ruggedly and are usually more accurate than the entry-level benchtop brands.

The motors, cases, and gears are usually created to better withstand the insults of construction sites. the comparisons between the job site table saws and the benchtop saws explain the fact that various job site models have ¾ miter slots, better fences, sliding extension tables, better over alignment, larger rip capacities and lastly, folding stands with wheels.

There are some features you need to know if you desire to use the job site table saw. These features will be listed and explained below as follows;

We often hear the word accuracy when it comes to discovering the advanced table saws. The job site table saw has the capability of being calibrated and it must be the first thing you do after setting it up.

Some of the abilities state that the job site table saw possesses solid construction and wide cast front clamp, it also stays in one place while the rack and pinion system moves it into place. The job site table saw might not be perfect but it removes a lot of accuracy problems that come from locking the fence out of square on some systems.

Portability boils down to a few of significant attributes. First and foremost, the weight has a huge effect on how simply you can transport the table saw, especially if it has to move into the bed of a truck instead of a trailer. If you have got a trailer, then wheeled sand becomes your associate.

Assuming that height adjustments were standardized, we probably expect each job site table saw to make them nearly identically. Observing the hood, we found numerous different ways, each with their effect. Most of the job site table saw employ a bevel gear system that provides smooth and reliable performance. They mostly used solid metal gearing, threaded rod, and plastic bevel gears. 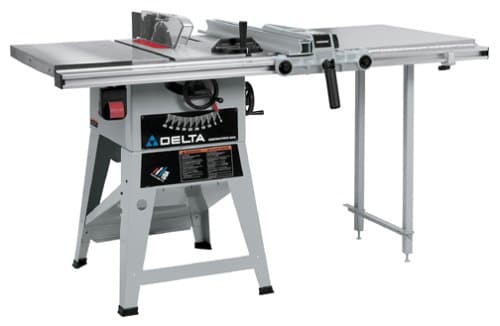 Contractor table saws also known as open stand saws are heavier and larger saws that are attached to a stand or base, usually the wheels. On these type of table saw, the motor often a 1 to 1.5 or even 2 hp (750 to 1500 W) induction type motor hinges off the rear of the saw on a pivoting bracket, though direct-drive brands have existed and driven the blade with one or probably two rubber V belts.

This is the kind that is usually used by hobbyists or homeowners because a standard electrical circuit enables adequate power to run it and it is as a result of its low cost. Because the motor hangs off the rear of the saw, dust collection is often a big problem or most at times ineffective.

Contractor table saws were created to be somewhat easily moved or carried, usually possessing wheels and were frequently purchased to job sites before the invention of smaller benchtop brands in the early ’80s.

Contractor table saws are also heavier than benchtop saws but are still lighter when compared to other types of saws. Their larger size, as well as their powers, enable them to be used for larger projects and also enables them to be more durable, accurate and longer-lasting than benchtop saws.

The trunnions, as well as the gearing and arbor assembly of a contractor table saw, are less husky than those discovered on more expensive table saws. The contractor’s table saw motor hangs off the back of the saw, a feature that is meant to make the motor easier to remove for transport. It is also usually connected to the arbor assembly by way of a single V belt.

Making use of the best quality saw blade and using the blades created for a specific kind of cut can improve the performance of a contractor table saw and bring it up to speed for various advanced woodworking projects.

Purchasing a contractor table saw that is equipped with solid cast iron extension wings tend to increase the stability of the saw, and aid lowers the effect of vibration on the saw’s less substantial trunnions as well as gearing.

Some of the features of a contractor table saw include; more robust components and more accurate results, they possess direct-drive motors, they are also more powerful and durable which enables them to be suitable for heavy-duty use. Also, they also come with better fences and alignments adjustments (24 rip capacities and some extension tables).

True contractor table saw used to be the go-to table saw for professionals, featuring belt drive as well as wide outboard induction motors. As their creation progressed, their motor became stronger and more powerful and the units became heavier, weighing as much as 200 to 300 pounds.

Besides, their outboard motors needed longer belts, which went above the amount of vibration manufactured, and their dust collection abilities were really bad.

With this new emergence of portable saws, the contractor table saws continued their motives as stationary saws in the workshops of hobbyists as well as enthusiasts because they were a lot cheaper than the equivalent cabinet saws, and a lot stronger than the new portable brands.

It should be noticed by individuals who are into woodworking business that contractor table saws along with outboard motors are extremely rare and the ones you may see or encounter are probably the old models.

Related Articles
We will be happy to see your thoughts

Welcome to Sawinery. We are a news and analysis website covering anything related to woodworking and saws.