Moment of honesty: If you buy something through our posts, we may get a small commission. Read more here.
0

From Tacklife, this is one of the cleanest miter saws we’ve seen on the market. The PMS03A looks fresh, has that nice metallic look and its professional quality. The price isn’t too bad considering all the features it has and all the safety tactics it makes sure to employ when you’re doing a cut. There’s safety locking for anything that might go wrong, there’s the lower position of the cutting area and this miter saw comes with a professional-grade laser. This means, your cuts will be as smooth and as precise as they can be without sacrificing quality. 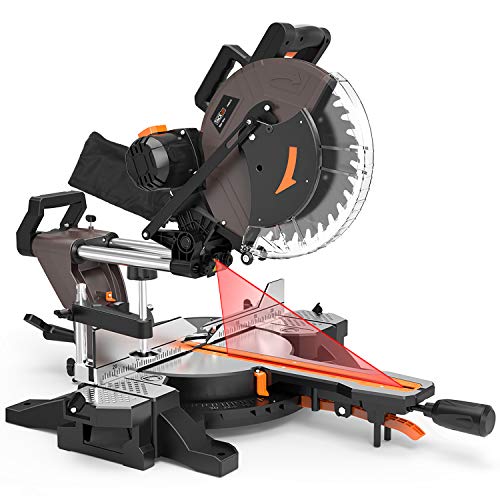 The swivel arm of this saw allows the saw to cut at unique variations including 45-degree angels from both sides. Props to the engineers who designed this product and allows the arm to have a lot of wiggle room when it’s in use. There’s not much in the way of the arm and the blade guard is well done as well. There’s clear instructions on the machine and a lot of areas for you to grip to ensure you’re carefully guiding the saw in. The double bevels also ensure that you’re getting the most out of your cuts and the machine’s function.

Q: What’s the weight of this saw?
A: Surprisingly to us, the weight of this saw is only 30 pounds, which makes it really easy to pick up, move from location to location and we’re really glad this thing is portable because it looks like it’s made out of all heavy aluminum metal but it’s not that heavy at all.

Q: What’s the voltage of the saw?
A: According to the manufacturer, the official voltage is only 120 volts which isn’t too much and is more than enough to get any kind of cut job done that you have. The wattage is 1700W which is pretty moderate but could be seen on the high side when it comes to miter saws.

Q: What angles can I cut at?
A: You can cut from 45 degrees to -45 degrees and the blade comes stationary at 0 degrees for your convenience. You can easily change the degrees with the built-in dial and it’ll tell you exactly how many degrees you’re at.

While there’s not a lot of reviews readily available for this particular saw, we can assure you that you won’t go wrong with it and it’s pretty great to have in your arsenal. It has a lot of well-detailed features that are missing from other modern-day miter saws, it has the unique capability of doing double bevel cuts which aren’t something we’re to seeing and overall, we think it’s a good saw. The price might be slightly too high for what’s being offered but it’s not too expensive and we would say generally, it’s worth the purchase.

The ergonomic design is nice, it’s easy on the hands, it’s easy to clean up after and we have no real major complaints to list about this saw. If you need an efficient and powerful miter saw that’s lightweight, then this is your saw.

Robert Johnson is a woodworker who takes joy in sharing his passion for creating to the rest of the world. His brainchild, Sawinery, allowed him to do so as well as connect with other craftsmen and women. He has since built an enviable workshop for himself and an equally impressive online accomplishment: an extensive resource site serving old timers and novices alike.

Latest posts by Robert (see all)

Tacklife PMS03A Review
6.5 Total Score
User Rating: Be the first one!
Related Articles
We will be happy to see your thoughts