Skip to content
Moment of honesty: If you buy something through our posts, we may get a small commission. Read more here.

Table Saw vs Miter Saw — What are Their Differences and Uses? (2021)

The functionality of both the table saw vs miter saw is similar, but there are discrepancies that can affect the outcome of your project. Choosing the wrong one for your workshop can be a real headache, and returning the saw might not be an option. Our team are pitting the two types of saws against each other to help you choose the right one.

Our experts will take a deep dive into both miter saws and table saws. We will explain in detail what the saws can be used for as well as the pros and cons of each.

What is a Table Saw

It sounds like a table saw is meant to be placed on a table, but in fact, the table saw refers to a saw that has a wide table to work with. There are three main types of table saws, one that has a wheeled stand that is often seen in woodworking shops, industrial options that have a cabinet, and smaller, more compact models that are considered portable that do not have a stand of any kind. 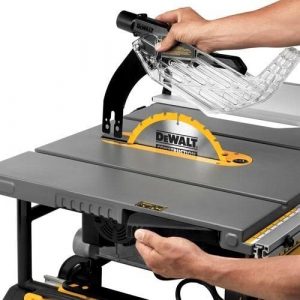 Purpose of a Table Saw

As our experts touched upon on the bullet list above, the table saw is by far the more versatile tool, with excellent performance for different cuts. Woodworkers use a table saw for most basic jobs, thanks to the table saw cutting skills such as rip cuts, cross cuts and angle cuts, especially for larger materials.

It can cut wood, metal and most other materials including sheets. Table saws can come in 10-inch and 12-inch models that can help cut down working time because of the sheer power they can produce.

What is a Miter Saw

Miter saws such as excellent Ryobi miter saws also have a circular blade like the table saws, but instead of coming up from the bottom, the blades of the miter saws lowers down onto the material. A big difference between a miter saw VS table saw is miter saws do not come with a stand, unlike a table saw which can sometimes be accompanied by a wheeled stand or cabinet.

However, miter saws also have different types. The first one is the basic miter saws, which are geared towards straight cuts and angle cut jobs. Users can switch between the two cuts easily with a few simple adjustments. As the name suggests, the basic miter saw is meant for simpler cuts and projects. For more advanced cuts, woodworkers would need to use a miter saw that’s more complex. 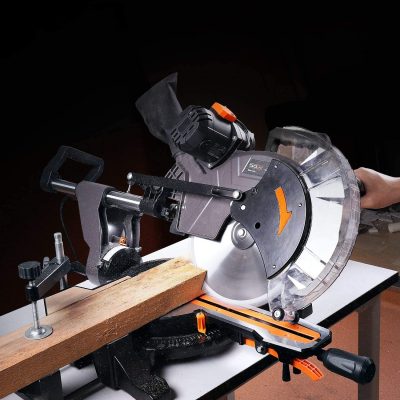 Purpose of a Miter Saw

The miter saw is quite a versatile power tool. It can make all the difference between clean and precise cuts compared to a table saw if it is used right. Woodworkers and construction workers use a miter saw for small applications such as crown or base moldings, trim work, picture frames and anything else that requires angled cuts.

While the miter saw can be a great addition to a workshop, our experts mainly see them being the most useful for carpenters.

(If you are planning to make miter saw projects, here are the top miter saws ideal for beginners)

Main Differences Between a Table Saw and Miter Saw

Now our team will go into further detail on the differences between table saws VS miter saws to help you make an informed decision.

Since the table saw is larger, it is also more powerful than the miter saw. A table saw is our experts’ recommendation for larger pieces of wood and bigger wood projects. 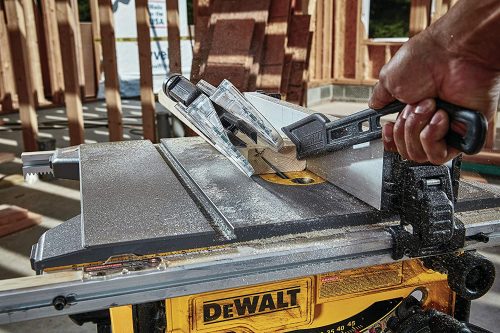 The smaller miter saw is the better choice if power isn’t your top consideration. Depending on your line of work, it doesn’t hurt to have both a table saw and a miter saw handy in your workshop if you can afford it and have the space.

The blade on table saws is stationary, while the blades on miter saws are more flexible. To use a table saw, you would need to push the piece of wood through the blade but you can lower the saw blade on a miter saw to accommodate your needs. This makes table saws more suited for longer and deeper cut jobs.

Since there isn’t really a throat, it’s also easier to deal with a larger piece of wood using a table saw. For more intricate cut jobs, the table saw would require a miter gauge or other accessories to be more precise. 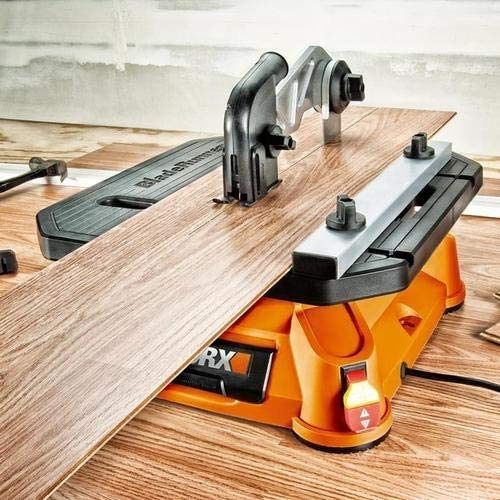 You can still conduct straight cuts using a miter saw, but the cuts are much shorter compared to the table saw. A table saw can make angled cuts but with a lot less precision. Instead, our team suggests going with the miter saw to cut angles at 45-degree or a 90-degree angle. The miter saw offers a lot more precision.

Due to how the blade is mounted and the adjustability for bevel cuts, the miter saw is the winner for precision and versatility. The downside is they cannot handle larger pieces. The moveable arm which the blade is mounted on also gives users more flexibility when angling the cut.

The table saw is best for large pieces of wood, which makes the cut job less detailed. It can do long straight cut jobs but is not a match for miter saws when it comes to smaller jobs. Our experts say the table saw is great for a rip job, but isn’t as equipped to handle angular cut needs. 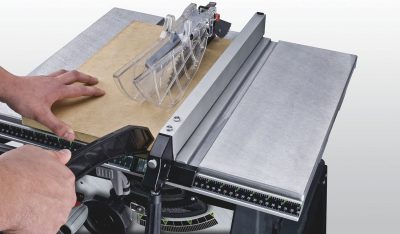 Since the miter saws are smaller and less powerful in general, they are also the better choice for softer materials like plastic. Using the larger table saws to cut through softer material could be much more dangerous due to the faster blade.

Both miter saws and table saws are technically portable. Miter saws are the smaller of the two and more portable. Keep in mind that table saws are larger tools, which contributes to the weight that makes them less transportable. However, some table saws come with stands. You either get a wheeled stand or a wheeled cabinet, which can greatly increase portability.

Our team suggests looking at the wood projects you work with to decide between the miter saw vs table saw, but if portability is your top priority, then miter saws are the way to go.

Miter saws are the safer of the two keeping the structure sturdy and stable. A table saw can come with a significant kickback, which our experts say can be harmful for beginners. 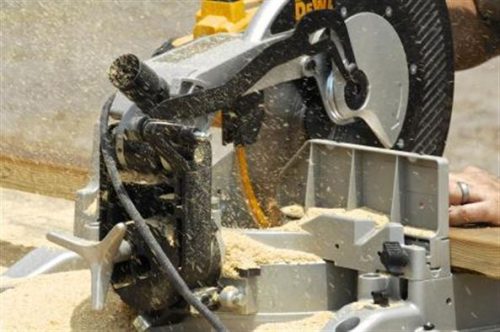 You should always wear the necessary PPE [1] when operating power tools, but it’s even more essential to have gloves on when operating a table saw to protect your fingers.

Since a table saw can almost make any cut a miter saw can make, another deciding factor for you could be your skill level. Since our experts say the table saw is the more dangerous option, we would suggest choosing a miter saw if you are a beginner. However, what’s most important is still the project at hand and what you want to accomplish.

Table saws can be more expensive than a miter saw because of the size. However, the general price between a miter saw vs table saw shouldn’t vary by much if they are both from reputable manufacturers like Dewalt using top quality materials. Both of these power tools are excellent additions for furniture makers and woodworkers alike due to their efficiency with wood. For this reason, our team suggests investing in both if you can.

A lot of table saw and miter saw options can come with accessories to help make the cut job safer and more efficient. Such an add-on would be something like a miter gauge, which can help with angles and sometimes bevel settings.

Is a table saw better than a miter saw?

No, a table saw is not better than a miter saw. The two types of saws are meant for different cut jobs. The miter saw is the better tool for angles and precision, while the table saw is better for large woodworking projects and powerful straight cut jobs. Choose which is best for your workshop depending on the type of cut you need and the projects you take on.

Should I get a table saw or miter saw first?

You should get a miter saw first if you work with smaller projects. These tools are excellent for more precise and intricate angles and are better suited for beginners. Table saws are better for experienced workers because it can have a kickback that could be dangerous for inexperienced users.

As we close out our miter saw vs table saw review, our team stresses that there isn’t one that’s better. They both work well for wood projects and can perform similar cut jobs. The difference between the two is the angle versatility and where the blades are mounted. The miter blade is mounted on an arm while the blade comes up through the saw table on a table saw. Whichever one you choose should depend on the wood projects you work with.

You can also check how we pitted miter saw against chop saw here. Read next!